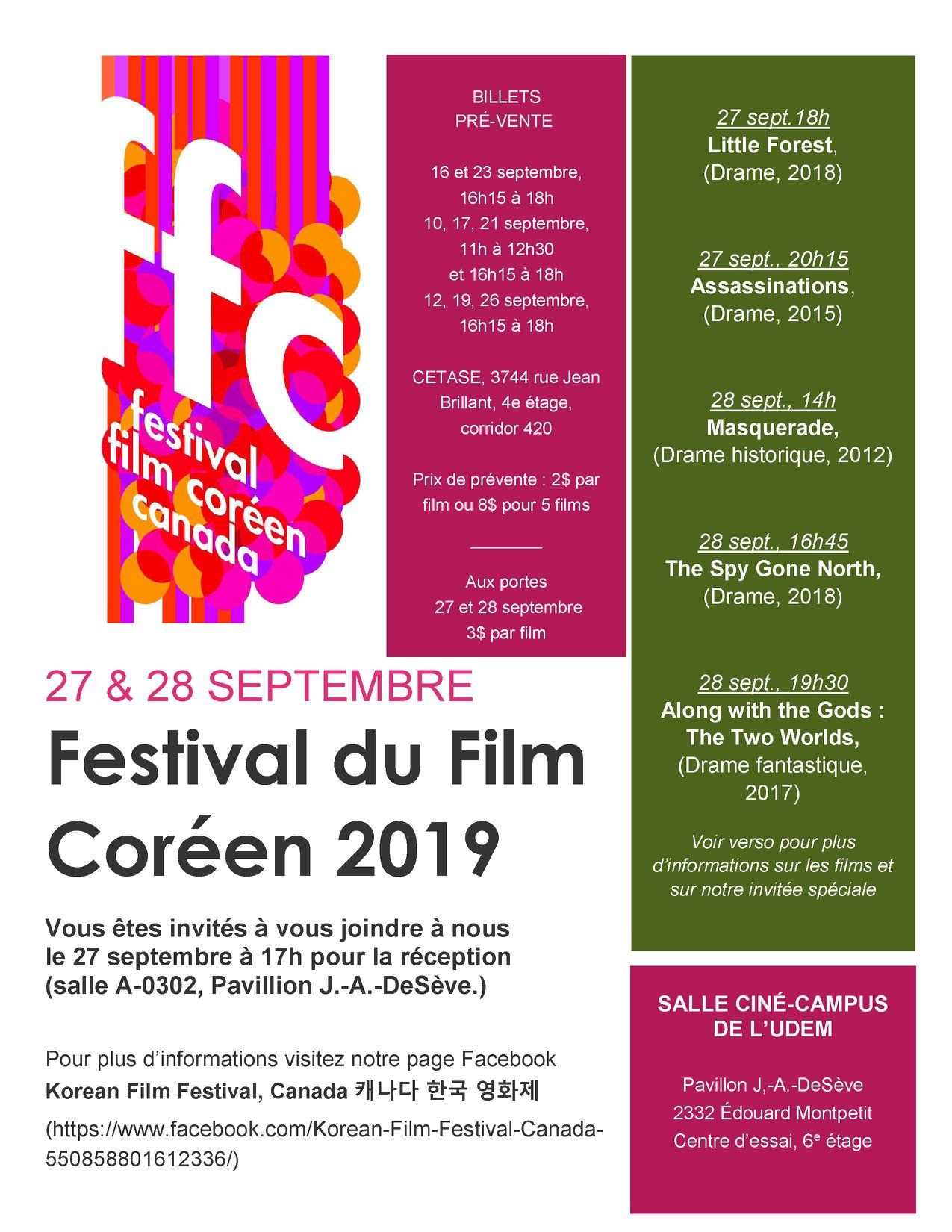 In the celebration of the 100 years of Korean cinema, the 6th edition of Korean Film Festival in Canada (KFF) took place in Montreal on September 27th and 28th, 2019 at the Ciné-Campus. The festival opened with Director Im Soon-Rye’s film, Little Forest (2018) along with films from the Hallyu Wave, including Masquerade (2012) starring acclaimed actor Lee Byung-Hun, and Assassination (2015). The festival marked the first time KFFC partnered with CETASE at U de M. It was also supported by the Korean Cultural Centre Canada, and Korean Communities in Montreal. 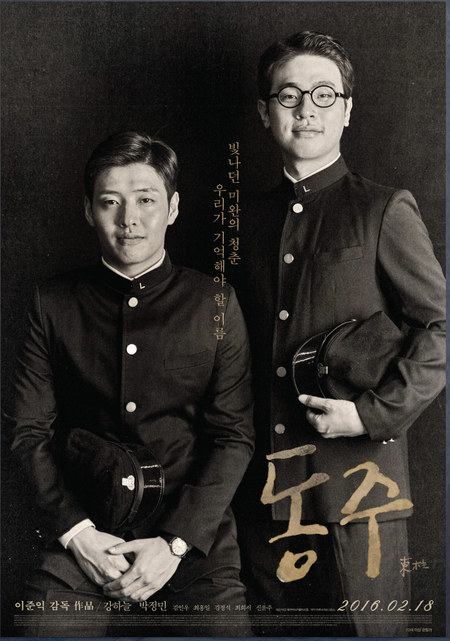 To celebrate 100 years of Korean Independence day, KFFC made a film screening of Dongju (a film about the poet Yun Dong-Ju) by Lee Jun-ik at the Korean Community Centre in NDG. This project was supported by the Korean Association (Community Centre) of Montreal and the Consulate of the Republic of South Korea in Montreal. 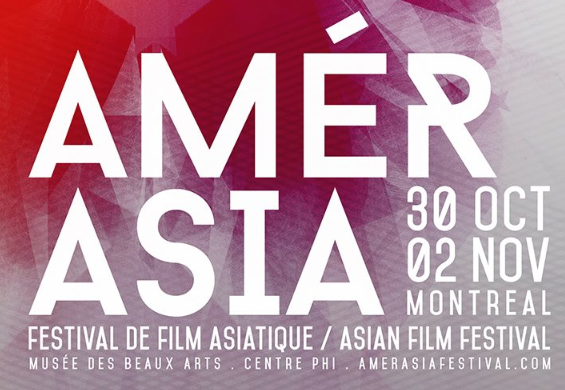 Under Ciné-Asie’s administration, the 4th edition of AmérAsia Film Festival showcased screenings of 30 independent Asian-Canadian media arts works from November 27-30, 2014. AmérAsia invited independent artists and professionals as guest speakers for round-table discussions and Q&A sessions following the screenings. Workshops were held that offered hands-on experiences in the film industry to the public and to professionals. The screenings contained short, middle, and feature-length films of any genre that had Asian content. The event took place at the gallery MAI, and was supported by the Consulate of the Republic of Korea, Montreal.

The Korean Film Festival is a traveling festival. This year, the festival traveled through Regina, Calgary, and Edmonton, before settling in Ottawa and Montreal for its major events. Ciné-Asie, along with the major support of the Embassy of the Republic of Korea, presented the first edition of the Korean Film Festival in Canada, highlighting Montreal in partnership with the Cineplex Odeon Forum and Mosaicultures Internationales Montréal at the Montreal Botanical Garden. KFF presented ten full length feature films and five short films, focusing on two themes: a spotlight on rising star Ryoo Seung-yong, whose acting abilities allowed his roles to become well-received with the public in his starring films, and a focus on the director Bong Joon-ho, whose remarkable films, The Host (2006) and Mother (2009), invites viewers to watch it again and again. KFF also showcased a selection of the five best short films from the Mise-en-Scene Short Film Festival (MSFF) of Korea.

(The Korean Film Festival of Canada took place in 3 Canadian cities: celebrating the 50 years of diplomacy between Canada and Korea. Supported by the Cultural Ministry of South Korea and the Consulate of Republic of Korea in Montreal, International Mosaic-cultures of Botanical Garden and Cineplex Odeon Forum, AMC Forum.) 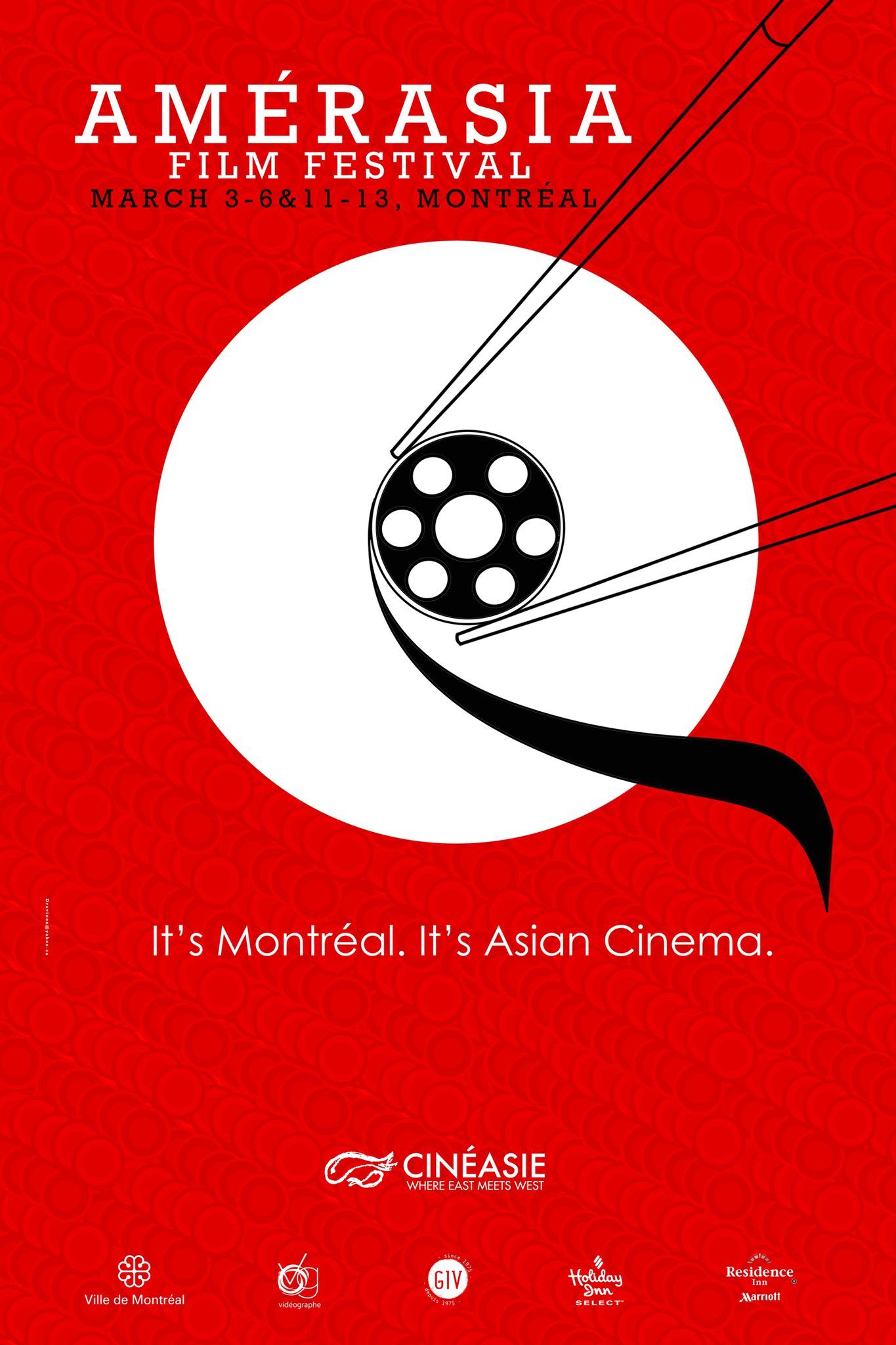 The Smartphone Film Challenge, Co-Production of 2nd installation of Asian-Canadian film Conference, Master-class of Yu Seung-wan, Asian calligraphy workshop, Industry Luncheon, seminars in Asian Diaspora on screen, and the 3rd edition of AmérAsia Film Festival, Montreal. Supported by Citizenship and Immigration of Canada, the Consulate of Republic of Korea in Montreal. 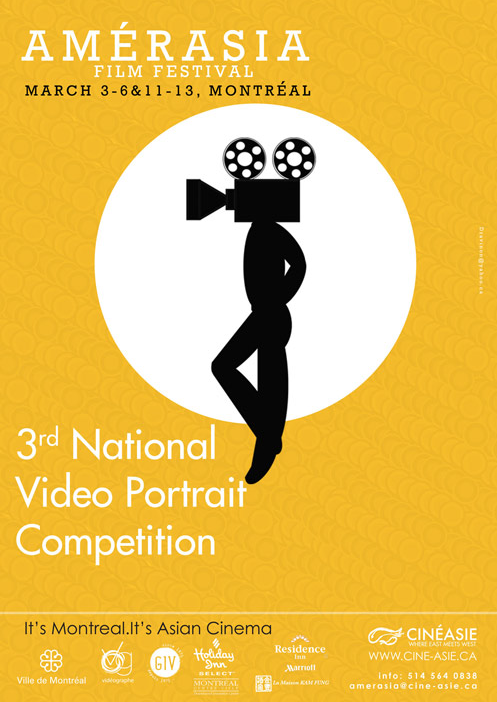 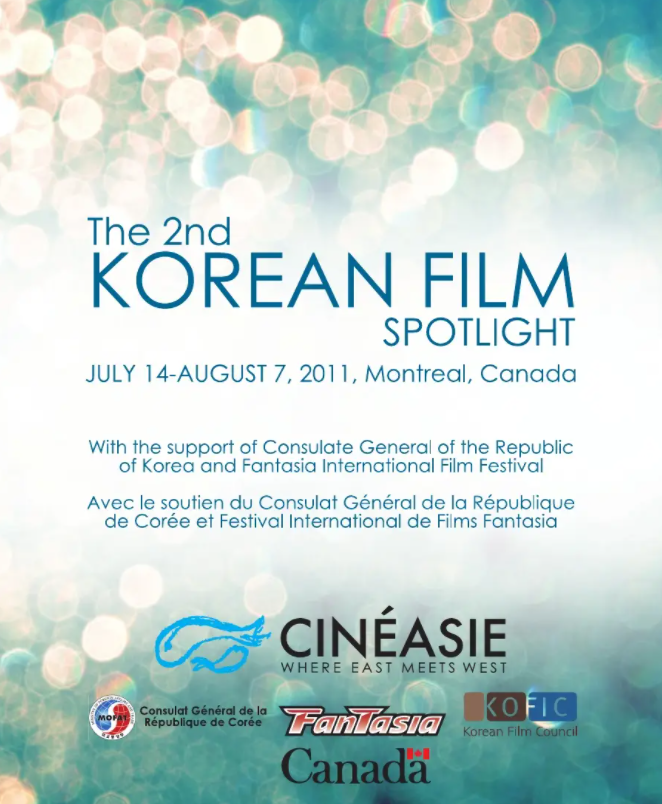 Seminars on “Blending Identities,” Co-Production of the 1st installation of Asian-Canadian Film Conference, and the 2nd AmérAsia Film Festival. Supported by Ville de Montreal and Citizenship and Immigration of Canada. Supported by National Film Board of Canada, Cinematheque Quebecois, CineRobotheque, and Cinema de Seve.

“The Korean Film Festival of Canada.” Financially supported by Heritage Canada and the Film Study department of Concordia University.

“North-American Tour of the avant-garde cinema of the Director Jeon Soo-il:" This project toured 7 major cities in North America: Smithsonian Museum in Washington DC, Tisch School of the Arts at NYU, UCLA and the four major Cinematheques in Canada. Supported by the Culture and Information of Service of the Republic of Korea. Collaborating institutions were NYU, UCLA, Smithsonian Museum, and Cinematheque in Montreal, Ottawa, Toronto and Vancouver. 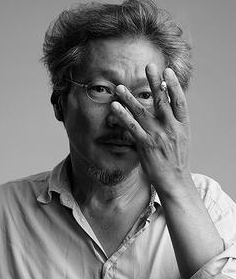 “The Retrospective on Contemporary Korean Cinema” in collaboration with Cinémathèque Québécoise, Montreal. 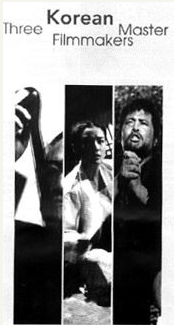 The first activity of Korean film, under the Ciné-Asie's umbrella, the renowned project on “Three Korean Master Filmmakers: Shin Sang-ok, Yu Hyun-mok, Im Kwon-taek” was launched. This was the first major retrospective of Korean cinema in Canada. Collaborated with Museum of Modern Art (MOMA) and major cinema conservatories across Canada (Montreal, Ottawa, Toronto and Vancouver). This project was supported by the Ministry of Tourism and Sports in South Korea, the Team-Canada of Prime Minister Jean Chretien’s administration, New York Korea Cultural Service Center, all 4 cities of the 4 venues across Canada, and Korean Consulates in those 4 cities.

Held “Chinese Cinema from 1933 to 1949” in collaboration with the Film Society of Lincoln Centre, NYC. Venue partner was Cinema de Seve in Montreal. Supported by the Film study department at Concordia University. Launched “Who Does What,” a monthly print newsletter, to promote and introduce Asian-Canadian Film and its industry. Held monthly seminars and workshops on Asian-American artists in collaboration with the Cinémathèque Québécois, and at the Asian Pacific Foundation, Montreal.